In June, I had the privilege of attending the American Bankers Association’s Regulatory Compliance Conference in Orlando, Florida.  Every year, the ABA honors a professional in our

industry with the Distinguished Service Award (DSA).  This year, the ABA could not have picked a more deserving person than Mary Clothier.

I’ve known Mary for 16 years and she’s been like a sister to me.  When I first taught at the ABA’s National Compliance School (2001), Mary guided me through the process and taught me the ropes of teaching at that level.  She introduced me to people and encouraged me.  Since then, Mary has counseled me on many things personally and professionally.  We don’t always agree on everything, but I’m always a better person after spending time with her.  I’m excited and delighted that Mary was honored with the ABA DSA!

Below is a picture of Mary and other past recipients of the ABA DSA.  From left to right: Meg Sczyrba, Mike Maher, Carl Pry, Chris Spellman, myself, Stu Lehr, Mary Clothier, Keith Monson, Lyn Farrell & Anna Rentschler. 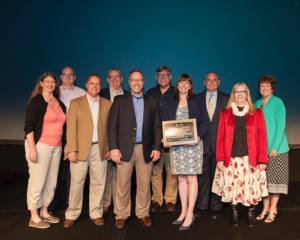 It is an honor to be able to call each and every one of these professionals a friend.

He is an expert in compliance regulations. He is also a motivational speaker and innovative educator. His quick wit and sense of humor transforms the usually tiring topic of compliance into an enjoyable educational experience. David is on the faculty of the American Bankers Association National Compliance Schools and has served on the faculty of the Center for Financial Training for many years.  He also is a frequent speaker at the ABA’s Regulatory Compliance Conference. He is also a trainer for hundreds of webinars, is a Certified Regulatory Compliance Manager (CRCM) and has been a BankersOnline Guru for many years. The American Bankers Association honored David with their Distinguished Service Award in 2016.

David and his wife Karen have three adult children, four grandchildren (none of whom live at home!) and two cats (of which Dave is allergic … the cats, not the children!). They recently moved to an acreage outside of Lincoln, Nebraska where he gets to play with his tractor. When possible David can be found fishing, making sawdust in his shop, or playing the guitar and piano. He also enjoys leading worship at his church.