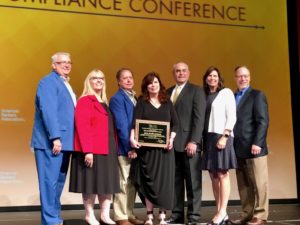 Pictured (above) are past recipients of the ABA’s Distinguished Service Award that were present at this year’s Conference.  They are, from left to right:
Chris Spellman, Kathlyn Farrell, Carl Pry, Patti Blenden, Keith Monson, Mary Clouthier, and David Dickinson

He is an expert in compliance regulations. He is also a motivational speaker and innovative educator. His quick wit and sense of humor transforms the usually tiring topic of compliance into an enjoyable educational experience. David is on the faculty of the American Bankers Association National Compliance Schools and has served on the faculty of the Center for Financial Training for many years.  He also is a frequent speaker at the ABA’s Regulatory Compliance Conference. He is also a trainer for hundreds of webinars, is a Certified Regulatory Compliance Manager (CRCM) and has been a BankersOnline Guru for many years. The American Bankers Association honored David with their Distinguished Service Award in 2016.

David and his wife Karen have three adult children, four grandchildren (none of whom live at home!) and two cats (of which Dave is allergic … the cats, not the children!). They recently moved to an acreage outside of Lincoln, Nebraska where he gets to play with his tractor. When possible David can be found fishing, making sawdust in his shop, or playing the guitar and piano. He also enjoys leading worship at his church.